Last weekend I raced 2 races over 3 days: the Vuelta Villarreal on Friday and Saturday followed by the penultimate round of the Copa España in Valls. 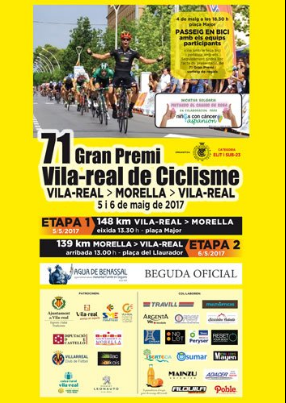 The thing all 3 days had in common was the fact that we spent most of the time on the front of bunch. Seeing the team lined out taking turns to ride in the wind, you’d be forgiven for thinking our roles were the same each of races. In fact, the 3 days couldn’t have been more different. On Friday we rode aggressively set up our climber, Oscar Cabedo for the win. On Sunday we had to ride to defend Oscar’s position on the general classification and be opportunistic about the possibility of taking the win overall. Sunday was a day to forget. We messed up and let a big breakaway go leaving us to contest the minor placings. 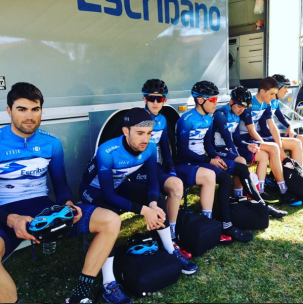 On Friday morning we gathered in the team bus for a meeting with the director. He talked us through the day: the profile was gradually climbing for the first 100km before two long climbs in the last 50km. The finish was a 3km climb with a steep ramp up to the Castle of Morella. We were going to ride for Oscar Cabedo. Oscar lives only a few kilometers from Villarreal and has been in great shape lately. While Oscar is a strong climber, he doesn’t have a natural sprint. This meant, for Oscar to win, we needed him to hit the last climb with the smallest group possible. We had to use our team to make the race hard to get rid of anyone who could beat Oscar in the sprint up to the castle. 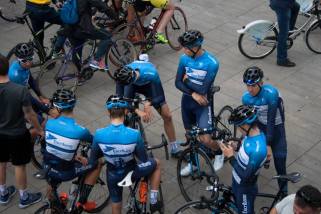 The team director made our plan clear: to make the race hard we were going to take turns on the front from 90 to 100km then set a high pace up the first long climb. Each of us had a clear role, two guys were to get in the early moves then do what they could to help pull on the front before the climb. Me and another rider were told to keep ourselves fresh until it was time for us to work and two of our more natural climbers were told not to work on the flat but instead to take over the pace making when the climbs began.

The race started hard and as planned we put two riders in the break of 10. This allowed us to sit behind the Fundacion Euskadi team as they chased the breakaway. The group of 10 came back sooner than expected, after 70km the race was back together and there was a slight lull in the action. Riders took the opportunity to eat, drink and speak to their sports directors in the cars behind. We began to get nervous, we needed a hard race and this felt like a club ride. It wasn’t long before we got the call from our director to get on the front. From 75km into the 150km race me and 3 teammates were pulling on the front. We set a hard pace, making everyone uncomfortable. 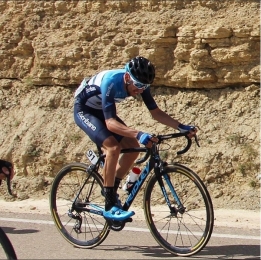 Oscar on the final climb

We had got on the front 15km sooner than planned and I was worried we would run out of gas by the time we hit the first climb. Nevertheless, I did my turns and kept an eye on how long we had to go. As soon as we hit the 6km climb after 100km there were 4 of us left, I did the first part of the climb on the front has hard as I could maintain. With 40km left of the stage I watched the race slip away from me. I had done my job, I just had to hope things went our way on the last climbs. Oscar ended up second on the day, just missing out on the win after a sprint with the Fundacion Euskadi rider Lopez Cozar.

Cabedo on the podium 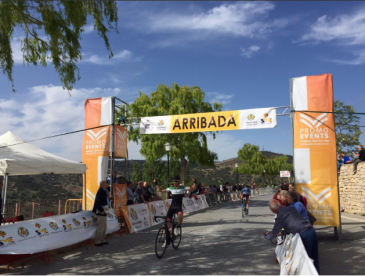 Sunday the stage was the same route as the previous day, but the other way around. We started in Morella and gradually descended to the coast for a flat run in to Villarreal. While Oscar was only second overall he had come in on the same time as the winner, meaning that if he finished ahead of him in the sprint he would win the race overall on placings. Our plan was simple, we had to keep an eye on the riders within a minute of Oscar on the general classification and do what we could to position him for the sprint. Before the race we spoke about the run in to the finish, with 8 roundabouts in the last 13km and one 90 degree bend 200 metres from the line it was going to be a messy sprint. We didn’t need Oscar to win we just needed him to finish ahead of the race leader and being a local lad Oscar was confident on the route and his chances of coming in well positioned. Me and one other guy were told to save our energy to position Oscar for the finish while the rest of the team were told to control the breakaways.

The race was fairly easy for me. Apart from one point where I had to help the team chase an opportunistic move from a rider only a minute or so down, I had a free ride. In the last 20km the Aldro team were on the front trying to bring back a lone rider who was off the front. Aldro were looking to lead out their sprinter Miguel Angel Fernandez to take the stage win. As we hit the first of the roundabouts, I sat behind Aldro with a teammate on my wheel and Oscar just behind. Riders were fighting for the Aldro sprinter’s wheel and in the chaos we lost Oscar. With only 5km to go I had to drop back and bring him back to the front. I killed myself to make up the placings with Oscar on my wheel and with 3km to go left him just behind the leader. I was spent, my job was done and just like the day before I had to hope Oscar did the business at the end.

Unfortunately Oscar crashed. We still kept second place because the incident happened inside the last 3km but Oscar was disappointed. Both days everyone had done their jobs perfectly and we had only lost out on stage placings. Morale was high as we made the transfer to Valls for the Copa España. 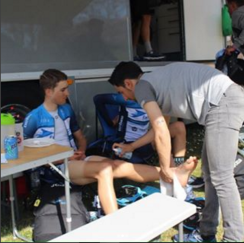 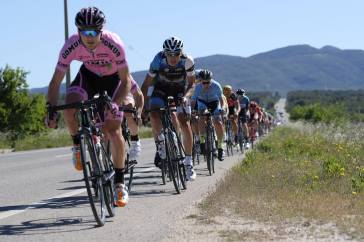 Sunday morning, in the bus, we looked at what was to come. We were one of a few teams who had raced the Vuelta Villarreal the days before so it was no secret we were tired. The plan was to ride smart and make the race hard where we could. The race was 2 big laps of a circuit with 2 long climbs, after a flatter 50km around the towns of Puigpelat and Vila-ronda. We were told to stick together to protect our three strongest climbers and if we could, do a some big turns on the last two climbs of the day.

I spent the first 50km following the moves. I was able to jump onto most little groups and had a dig myself on a small climb. The only break that stuck lasted around 15 minutes and included a teammate of mine, allowing me a little breather. After 50km we began the first climb of the day, the road was narrow and I was boxed in on the right hand side. I watched as a small group went off the front. Feeling the effects of the two previous races and perhaps underestimating the danger of the situation, me and my teammates began to slip further back in the bunch. Before we knew it there was a group of 10 with 2:15 on the peloton followed by a group of 14 only a minute behind them. 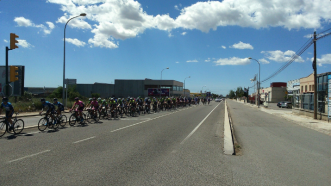 Sensing the danger my team got on the front. We knew we could bring back a breakaway with 2:15 advantage so we began taking it in turns to set the pace. All of a sudden I got a call to stop chasing from my teammates. Music to my ears. Where on a normal day I may have questioned the call, the way I was feeling I didn’t bother even to ask whether the instruction had come from the team car. I told myself that the teammate who had told me not to bother chasing knew something I didn’t. Perhaps we did have someone in the break. Maybe the break was too big and wouldn’t work together meaning it would come back on its own.

But before we knew it the the two groups had come together, the 24 riders had a 5 minute gap on us and we were the only team without a rider in it. Whoops. Our team car pulled up next to the bunch and ordered us to give it everything to bring it back. The next hour was humiliating, we were knackered. We only took a minute back on the break.

After the race we knew what was coming. The scenes on the team bus were as you’d expect. The director had every right to be frustrated with us. We had failed to get a rider in the top 20 meaning we had lost ground in the team classification. Things were made very clear: such a result was not acceptable and we have to improve.

This weekend is a perfect opportunity for us to do just that. It is the final round of the Copa España and our home race in Alcala de Henares. Let’s hope we can put in a good performance on Sunday and put the previous round behind us.