To prepare for the Vuelta Castellon starting this Thursday, my team had planned a trip up to the Basque Country for a couple of under 23 races in Beasain and Bergara. However, plans changed when riders became unavailable due to university exams and other commitments, meaning the weekend was cancelled. These were races I was keen to ride so I asked around and managed to sort myself out a lift to the races and found a reasonably priced bed and breakfast in Bergara. By 7am on Saturday morning, a friend of mine who lives in Zaragoza had picked me up on his way through Tudela and we were off to the races.

Hanging on 5km to go Saturday

Amongst the wheels, bags and kit, I sat in the back of the car as we made our way north past Pamplona, out of Navarra and into the Basque country. We chatted about the races and how our season was going. Arturo, the lad whose Dad was driving us to the race, rides for the Caja Rural development team that I rode for last year. He is a year younger than me but already has a good idea of how the bigger teams work in the Basque Country. We talked about which of his teammates will be the “protected riders” and who would have to work for the team.

Being a first year, Arturo’s job is to get in the early breakaways to ensure the older stronger guys or “protected riders” can ride in the bunch behind without having to chase. This is a role I am more than familiar with after spending a year with Caja Rural. This system of identifying 2 or 3 riders for the team to protect and assigning the remaining 6 or 7 riders to covering the early beaks is adopted by all of the big teams in the Basque Country. Generally, the races use flat circuits through towns for the first couple of hours to allow a breakaway to become established before the main climbs of today in the last hour. I have raced for a year and a half in the Basque Country and I have only once seen a breakaway get to the finish, and on that day there were around 20 riders in the break. Nevertheless, putting riders in the day’s break is important to ensure the protected riders aren’t forced to chase. Usually, of the 4 or 5 bigger teams, one will miss the break and have to chase. Teams who have riders in the break sit their remaining riders behind the chasing team to conserve energy before the climbs. 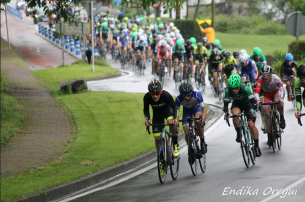 In order for a break to make the finish, it would need an equal representation of the 4 or 5 biggest teams and would need to be strong enough to make it over the climbs in the last hour of the race. Generally either a small break goes and only lasts until the first major climb or a bigger break of 20 or 30 go which breaks up on the climbs and the stronger riders in the break join up to the front group to contest the finish. 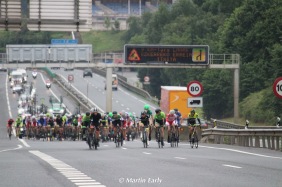 The break goes on Saturday

Saturday’s race in Beasian was always going to follow the usual pattern of a Basque race. Without a team, I was free of all the team tactics. I just sat in the middle of the bunch and watched the race happen. Several breaks went but, as is often the case, the race was too fast for anything to stick. Groups of 5 would go, others would get across and a beak of 10-15 riders would build up but it would all come back together as the bunch got nervous and riders would try to jump across from the bunch to the break. Eventually, after about an hour and a half, a move stuck. 25 riders quickly put a minute and a half into the bunch. Cafe Baque had missed the breakaway so it was on them to chase. With 20km to go before the first of 3 classified climbs, Baque had 6 riders on the front bringing back the break. The first of the climbs was Olaberria, a short, steep 1km climb averaging 11% with 2 ramps at 20%. This was followed by Mandubia, a much longer 8km climb, before we would finally tackle Olaberria again 5km from the finish in Beasain.

Cafe Baque on the front

Determined to bring the break back, Cafe Baque set a hard pace on the first climb of Olaberria, splitting the bunch. I managed to get in the front split and we made it up to the breakaway just before the second climb of Mandubia. The steeper ramps in the last few kilometers of Mandubia left us with a select group of 30 riders. 6 guys got away over the top of the climb and managed to get a good gap on the descent. The final climb 5km from the finish proved decisive; the stronger guys of the break of 6 managed to hold on to their advantage and my group behind exploded after stronger riders began to attack. I got over the climb with another rider and we worked together to catch up to the group of 20 in front. We got back on with 1km to go. I tried to move through the group to get ready for the sprint but the run in was very technical, with 3 corners and a roundabout, making moving up impossible. I started my sprint too far back and only managed to gain a few positions. I ended up 22nd.

After the race, I managed to get a lift to Bergara with a team from Eibar. I found the bed and breakfast I had booked, only a few hundred metres from where Sunday’s race would start. The couple who owned the place were interested in cycling and delighted to have a rider stay with them. They put me on the top floor away from all the noise of the bar across the road, sorted me out a good dinner with a friend of theirs who owned a restaurant nearby and they even drove me around the course for the following day. Chatting to the owner of the bed and breakfast, as we drove up the main climb of Asensio, it became clear to me that Sunday’s race was going to be much harder than the day before. The race would follow a similar format, 80km or about 2 hours of flat roads then we would go up the 8km climb of Asensio twice and finish on a steep 300m ramp to the finish in Bergara. 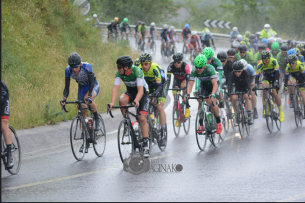 Like the day before a big group of 25 riders went clear and I sat in the bunch for the first two hours. After the first time up Asensio the bunch of 130 was whittled down to 30-40 riders. In the front bunch, and having got over the first time up the climb without going too deep, I was starting to feel confident of my chances of a result. I looked around the front group, I knew some guys would be forced to work for their teammates and others wouldn’t last long on the final climb having been in the early break.

Caja Rural’s remaining 3 riders put the pressure on the front group as we began Asensio the second time with 20km to go. I hung on, but on one of the switchbacks 2km from the top, a kick from Jaume Sureda, the winner the day before, cracked me. I tried to focus on keeping my rhythm and limiting my losses to the group. As I went over the top I was in contact with a group of 6 riders. We caught up with 4 more and the 10 of us began working together to catch the front group of 7 who had got away from us on the climb. In the last 5km we had the group in sight. Unfortunately for me, the biggest teams – Caja Rural, Cafe Baque, Lizarte and Quick Step Telcom – all had riders in the front group of 7, so their teammates in my group weren’t going to help with the chase. With 2km to go I realised we weren’t going to catch them so I began preparing for the sprint finish. In the last kilometer a rider attacked, I jumped straight on his wheel. I was sure he wouldn’t sit up because he had a teammate in the group with us. As we hit the final ramp up to the finish I opened up my sprint. I ended up 4th of my group, 11th on the day.

Sureda attacks – I go out the back

I was disappointed not to make the top 10 on Sunday but I am pleased with the weekend overall. I feel like I am going well ahead of the Vuelta Castellon which starts this Thursday. Look out for my next post and any news on Twitter. 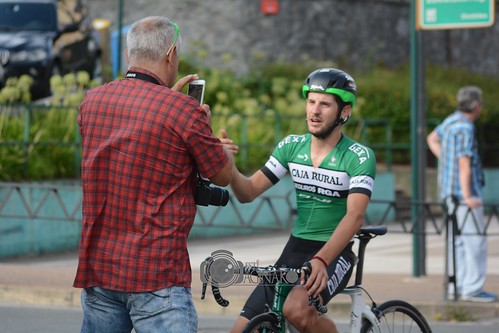