We are coming to the end of the pretemporada or ‘pre-season’. In Spain the U23 and Elite category riders are preparing for team presentations and training camps ahead of the first race at the end of February. This winter, for the first time, I have spent the pretemporada training with other Spanish riders and have got an insight into how they treat this part of the year. While the term pretemporada may directly translate as ‘pre-season’, the pre-season in Spain is treated very differently to how it is in the UK.

The first difference I noticed was just how long the other riders living near me had off the bike following their last race of the year. I moved to Durango at the start of October, after having finished my season a whole month earlier. I knew I’d have a few weeks of training on my own because the local riders had continued racing till the 20th of September. But, when November came around and my teammates’ bikes were still gathering dust, I was starting to wonder what was going on. I always thought such a long break from riding at the end of the year was just a sign you didn’t really like cycling: personally after 10 days off at the end of the season I am desperate to get going again. However, living in the Basque Country has shown me there is more to the pretemporada than I thought. 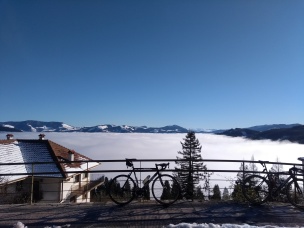 In Spain they say primero atleta y luego ciclista, first an athlete then a cyclist. They stress the importance of becoming a well-rounded athlete before specialising with cycling. This isn’t exclusive to Spain. Cyclists around the world generally subscribe to this philosophy, working other muscle groups during the winter helps avoid imbalances and increase bone density. Riders will work on their core and upper body strength in the gym and, some guys I know of, take up swimming or skiing at this time of year. But in Spain doing other activities in the off season has a particular importance, riders will take a break of around two weeks then go into an entire month of off-the-bike exercises.

The off-season sports vary from region to region. In the Basque Country, hiking is most common. In November we had a team training camp in the Urkiola natural park where we did two days of hiking as a group. It was a good experience but hard work for me and the other 3 English lads in the team: when the Basque guys would race off up the hills, we’d be at the back wondering if we’d even make it to the top. 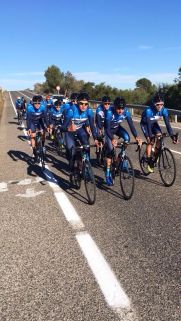 In other places in Spain such as Barcelona, riders do escaleras, basically running up stairs. I recently watched a Youtube video of the retired pro cyclist Alberto Losada explaining the value of escaleras to working the leg muscles and core stability. That day he did 12,000 steps with a couple of Spanish youtubers, Zugasti and Valentin. To most cyclists this seems like madness, riders are notorious for avoiding stairs like the plague. I can remember being in hotels after a race and joining the long queue of cyclists for the lift even when my room was on the first floor.

Around the middle of November, just when I thought my teammates were never going to start riding again, all of a sudden everyone was out. Soon I was training with groups of 10-15 guys, we’d ride out and see dozens of bikes outside cafes and riders of all ages. For lots of people this is the best time of the year the rides are very social and, in the Basque country, you often see pros and ex pros out with younger riders from their villages. Generally the full time riders will have a few weeks of these social group rides before going into more focused training. 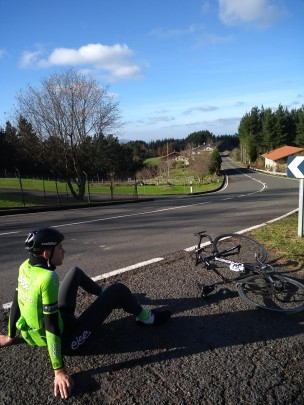 At the top of Montecavo 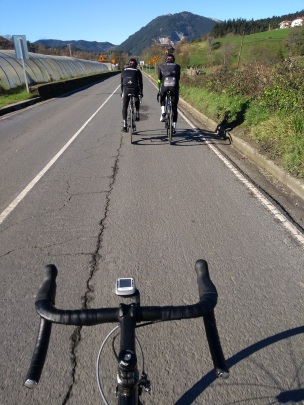 In December and January the weather gets bad in most of Spain, so those who can, go to the south to train. For the past two seasons I have spent this period in a hotel in Benidorm which does a very good full-board deal for cyclists. I have been lucky enough to be able to go to team training camps from the hotel in nearby towns: with Caja Rural I had a week of training in Xavia and with Escribano I spent 10 days in Oliva. With a week or so before the camp in the hotel and another couple of weeks afterwards, in 2016 and 2017 I spent the entire month of January in the south of Spain which I think made a huge difference to my training. 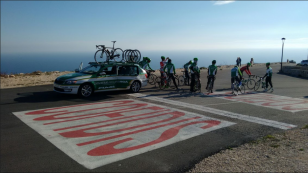 Since I have been going to the team camps and hotel in Benidorm the area has become more and more popular among cyclists. Most of the professional teams prefer to host their January camps in the area because the weather is more reliable than Mallorca, and this has attracted amateur and U23 cyclists by the thousands. This year, for example, lots of the Dave Rayner funded riders have gone there to train along with lots of other British full-time cyclists. Amongst the Brits the most popular place to stay is the town of Calpe, just up the coast from Benidorm. Although Benidorm is much larger, British riders call the area Calpe, perhaps down to the connotations of Benidorm as a party town and the popular ITV show set there.

This year my plan was to go back to the Benidorm hotel but in the end I couldn’t find a lift there  and the bus journey from Bilbao is a tortuous 10 hours. So instead I have decided to brave the Basque winter here in Durango. It will mean I’ll have to spend more time on the turbo trainer but, on the other hand, I can carry on going to the gym which has been a big part of my pretemporada so far.

Staying in Durango will also give me chance to get back to doing regular blog posts. We’ve got the team training camp in Cantabria coming up at the end of the month and the kit and bikes are arriving this week, so look out for that. I have also been in contact with a leading British sports nutrition brand who I will be working with via my blog soon.

Lastly I’d like to thank the Dave Rayner Fund who, this week, announced they will be continuing to support me and another 35 young riders this season. Their help goes a long way.